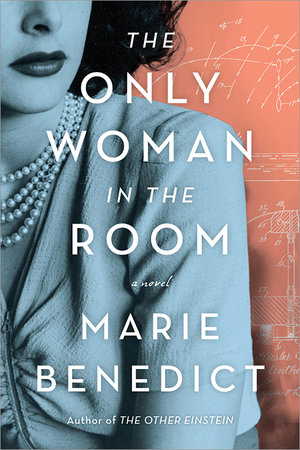 An actress, inventor, and keeper of secrets, the beautiful Hedy Lamarr was among many Jews who fled Europe during the 1930s and came to Hollywood to start a new life.  Born in Vienna in 1914, she studied acting with the innovative theater director, Max Reinhardt.  But she made the mistake of appearing nude in Ecstasy, a 1933 silent Czech film, and never quite shed the sex goddess stereotype.  When Hedy died in 2000, The New York Times noted that her life had been “messy and sad.”

In her newest novel, The Only Woman in the Room (Sourcebooks Landmark, Jan 2019), Marie Benedict tells a vibrant, nuanced story about the ambitious actress. The only daughter of assimilated Jews, Hedy made a bargain with the devil by marrying an Austrian arms dealer named Fritz Mandl who would, she believed, protect her from the Nazis.  But he turned out to be a brutal man and a fascist who encouraged Hitler to launch the Anschluss in 1938.

By that time, however, Hedy had fled to London where she contrived a meeting with the powerful movie producer, Louis B. Mayer.  From there she proceeded to California and five more husbands and several children, and starred in films with Robert Taylor, Clark Gable, Victor Mature, and Spencer Tracy.

Hedy’s thrilling escape from Fritz might seem like the climax of the story.  But when the U.S. enters the war and the Holocaust comes to dominate the news, Hedy feels anguished guilt about not sharing crucial military information that she overheard at Mandl’s dinner table back in Vienna. It is here that Benedict portrays the actress at her very best, as a co-inventor of spread-spectrum technology, which would, Hedy proposed, enable the Navy to manipulate radio frequencies and thus prevent the jamming of codes.  Readers will be fascinated by Hedy’s mastery of scientific theories as well as her ingenuity and persistence, as Benedict winds up with the glamorous actress once again upon a stage before a rapt audience.

Read the Q&A with Marie, who provides more insights into her work!