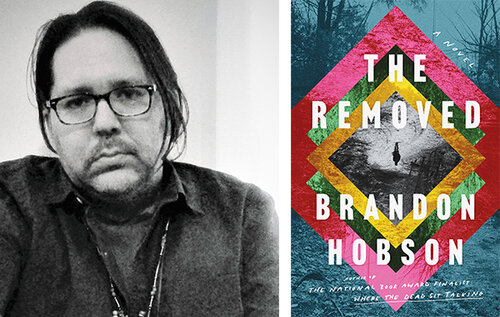 Brandon Hobson’s last novel, Where the Dead Sit Talking, was a finalist for the National Book Award. His new book, The Removed, focuses on the Echota family in the days leading up to its annual family bonfire.

The small-town Oklahoma gathering celebrates the Cherokee National Holiday, but the Echotas also use it to remember teenager Ray-Ray, their son and brother, killed 15 years earlier in a police shooting. The book, which comes out Feb. 2, is told from multiple points of view: Maria and Ernest, Ray-Ray’s parents; his siblings Sonja and Edgar; and Wyatt, a foster child placed with the family.

Hobson, originally from Oklahoma, now lives and teaches in New Mexico. He’s an enrolled citizen of the Cherokee Nation Tribe of Oklahoma. We caught up with him to talk about what inspired The Removed, how he incorporated Cherokee folklore and healing from trauma.

This conversation has been edited for length and clarity.

The Removed deals with police violence and generational trauma — long-standing issues that burst onto front pages in the last year. How long has the Echota family story been in your head? When did you start writing it?

I started writing it in 2017 or 2018 after thinking a lot about gun violence against Natives and how Native kids were getting shot by police officers and not getting a lot of national coverage because of it. It’s frustrating how many articles blamed mental health issues on the victims instead of outright racism. There’s a stereotype against Natives that many Native people deal with mental health issues and that’s what creates violence, but that stereotype is so dangerous. I began writing about the Echota family right away with the idea that they were still dealing with the effects of the violence 15 years after their son was shot.