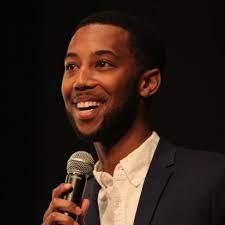 A major part of being a change maker is to have what seems like a “ridiculous sense of hope” in the face of adversity, speaker Derek Rhodes told his virtual audience during Tuesday’s Indiana State University Human Rights Day.

Rhodes, one of two main speakers in this year’s scaled down, virtual event, talked about his life’s experiences focusing on community service and creating positive changes in the world. A 2015 Duke University graduate, he served as an intern during the Obama administration and currently is the director of business strategy for the NBA’s Miami Heat.

After his presentation, one student asked him about “masks” he has worn in his life, perhaps appearing one way and feeling another.

One mask is “feeling hopeful all the time. I think there are so many times where the news can get you down or something you’ve seen on social media gets you down,” he said. “But a huge part about a being a change maker, about being a concerned citizen, civically engaged, is that you have to have what almost feels like a ridiculous sense of hope sometimes. In the face of so much adversity, you can be OK.”

He added, “That’s a mask I can wear when things aren’t going right,” he said.

Because of COVID-19, the event this year was virtual and featured two main speakers, Rhodes and Nick McCreary, Creighton University sustainability director, who previously served as ISU’s sustainability coordinator.

During his keynote address, titled “How to Change the World,” Rhodes also described how a quote from Mahatma Gandhi became the mantra that guides his life.

“The best way to find yourself is to lose yourself in the service of others,” Rhodes said, as he described his own life’s journey of community engagement. “I just want to help others. I’m a giver at heart,” he said.

Gandhi employed nonviolent resistance to lead the successful campaign for India’s independence from British rule, and in turn inspired movements for civil rights and freedom across the world.

Rhodes told students that as they fight for change and human rights, they will encounter opposition. He stressed the importance of remaining hopeful in the midst of opposition.

He also provided some advice for students on how to approach their goals of creating positive change in the world.

• They should communicate their thoughts to the world, which is a way to rally others to the same cause.

• They should get comfortable with being uncomfortable, because persuading others with different viewpoints and backgrounds can be difficult. Advancing human rights “means I have to be concerned about the well being of all people, regardless of race, gender, creed, background or political belief.”

• Third, he told them it’s important to have fun, despite their heavy missions. “We need to be concerned about our longevity in the fight,” which could take years and decades to make change. “The only way we’re going to be in it for awhile … is to make sure we’re also smiling and laughing a little bit and having some fun.”